There are many types of scaffoldings that can be found all over the world.

In the US, the most common types of scaffolding are steel and aluminum.

These types of scaffolding consist of various parts, which fit together to allow the users to build them in a quick and simple manner.

Metal scaffolding is by far the most common scaffolding material used in North America and Europe.

Some scaffold systems come as an entire set, and these are common for small projects where a person only needs to be elevated a couple of feet off the ground. These are sometimes referred to as “Baker” style.

Other metal scaffolding systems come as individual parts, and are assembled on-site.

This assembly allows the user to customize the scaffolding in order to meet the height and dimension requirements of the specific project.

Both aluminum and steel are sturdy materials, and very often the question of weight and cost will determine which is used.

Aluminum is lighter than steel, but most steel scaffolding is costlier than aluminum.

In some parts of the world, other materials are used to make scaffolding.

Bamboo is very common in Hong Kong, and many parts of the world use wood.

However, the advantage with using prefabricated pieces made of aluminum or steel is that the parts are a standard size, and interchangeable with very minimal additional machining.

There are several main components of a metal scaffolding. All of these pieces fit together in order to build the structure.

Frames act similar to the wall of a building. They are placed in a vertical direction, and provide the support.

Two frames are placed at a distance of about 8 feet (depending on the exact make and model of the scaffolding).

In some cases, it is individual tubes which are used to create the frames. This is similar to a home which has a steel load bearing beam instead of a wall.

Cross-Braces ensure the frames stay vertical, and limit the amount of movement that may occur.

Level jacks are placed on the bottom of the frames and act as the “feet”. They have some screws which can be used to adjust the frames which rest on them up or down.

This allows the users to ensure the final product is perfectly level.

The platforms are the surfaces on which people or objects are placed.

In many scaffolding systems, two platforms (each between 20 and 28 inches wide depending on the specific brand) are placed side by side.

Depending on the manufacturer, different methods for holding the pieces together will be used.

Sometimes pins are used which slide inside of pre-drilled holes in the metal tubes. Other times “couplers” will be used which grip the tube from the outside.

These are the main components of a scaffolding system, however there are many other elements that are used depending on the type, size, and location of the scaffolding.

The purpose of scaffolding is to provide a temporary structure. The keyword is “temporary”.

In some cases, a scaffolding may end up being used for a long period of time.

Scaffolding is most common when constructing a new building, or performing maintenance on a structure.

Some are suspended from above, as in the case of window cleaners. For this type of scaffolding, a very specific scaffolding is used, which has been designed to be adjusted along the height of the building.

When working with scaffolding, there are many standards that apply.

Many of these apply to the methods used to erect the structure, as well as ensure that the structure is safe for workers to work on them.

They also ensure that anyone who is passing below is safe from overhead dangers such as falling objects.

Some of these standards include the maximum ratio of width to height that a scaffolding can be, and other standards indicate the height which the guardrail must be positioned.

The standards vary from country to country, and even from State to State or County to County. 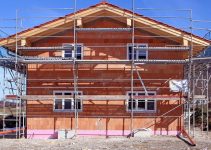